Everything in the following story is completely true.

Except for the parts that I made up.

My friend Rich was in law school in 1985.  He won a mock jury competition in law school, and a party was in order.  His plan was to invite everyone who participated in the mock jury to the party.

Theresa looked fantastic at the party.  (She still does, by the way).

I asked her for her phone number.

She handed me this little piece of paper. 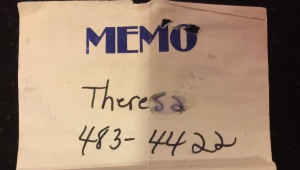 So the next part of the story is where I gather the courage to ask her out for a date.  Part of the same conversation.  She just gave me her telephone number, so a date is a slam dunk, right?

I asked her “Would you go out with me next Friday night?”.

But she said no!

“Because I have plans with my brother that night”.

This is the part of the story where Future Heather, Future Dylan and Future Darwin are at risk.  Their very lives are at stake.  I have Theresa’s phone number in hand, but I’ve just received a “NO” for the first date request.

I can hear Future Heather, Future Dylan and Future Darwin yelling from the sidelines-  “ASK AGAIN YOU FOOL!!”

So I asked her “how about the following Saturday night?”

And she said yes!

When I now ask Theresa about that date request, I ask her “what would have happened if I didn’t ask you to go out the following weekend”?  Her answer always is “it would have been your loss!”

That date was an epic one.  After an unsuccessful visit to Death Disco, we had a lovely time at a cafe on South Street, some very sharp cheese, and a goodnight kiss with fireworks.

I didn’t know they had fireworks in Manayunk.

I won’t spoil the rest of the movie for you, but there was a second date, and a third, and many more to follow. 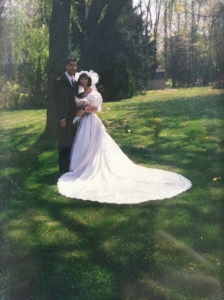 I’m glad she gave me her telephone number.