Pope Francis visited the United States for the first time last week.  As part of his visit, he came to Philadelphia on September 26th and 27th.

His visit was on my calendar as soon as it was announced, which was almost a year ago.  If you know me, you know that I like spectacle.  If there are satellite trucks, and helicopters, and news stations and CNN…..I want to be there.

I was there in 1979 when Pope John Paul II visited Philadelphia.  That was one of Philadelphia’s finest moments.  I had the opportunity to see John Paul II twice-  once during a Papal Parade which passed near my dorm at Penn, and once for the big mass on the Benjamin Franklin Parkway.

Some of you are reading this and thinking “but you are Jewish, Hal”.  Right you are, kemosabe.

But that has not prevented me from visiting some of the holiest churches, temples, shrines, and sites associated with other religions.  I am not afraid of learning what other people do.

You have to consider transportation,  food and water, communication, security (unfortunately), and a host of other things I’m not even aware of.

Where do 1 million people go to the bathroom?!

The impact of the visit extended far from Philadelphia.  We live about 40 miles from the city, and our township decided to have a Papal Panic.  All of the roads in our township were declared No Parking zones for the weekend. Below there is a photo of my front lawn, and my mailbox.  And my new No Parking sign. 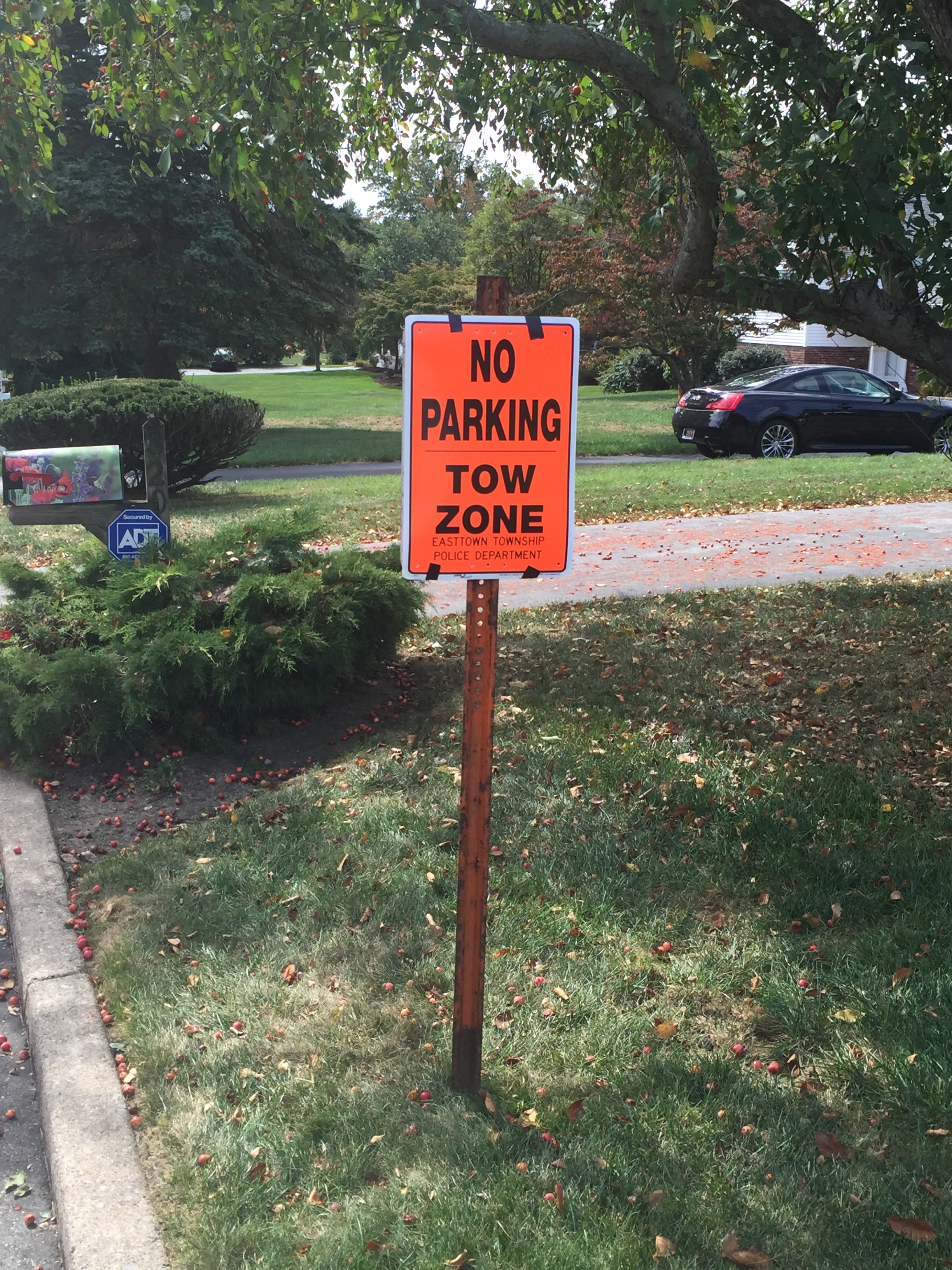 The reason for this still escapes me, because Pope Francis was staying 20 miles away, and the crowds were 40 miles away.  As I write this blog, that sign remains in my front lawn.

We decided to go to the events on Saturday September 26th, which included Pope Francis’ remarks on immigration at Independence Mall, and the Festival of the Families on the Benjamin Franklin Parkway that evening.

The night before the events, we gathered all of our tickets. 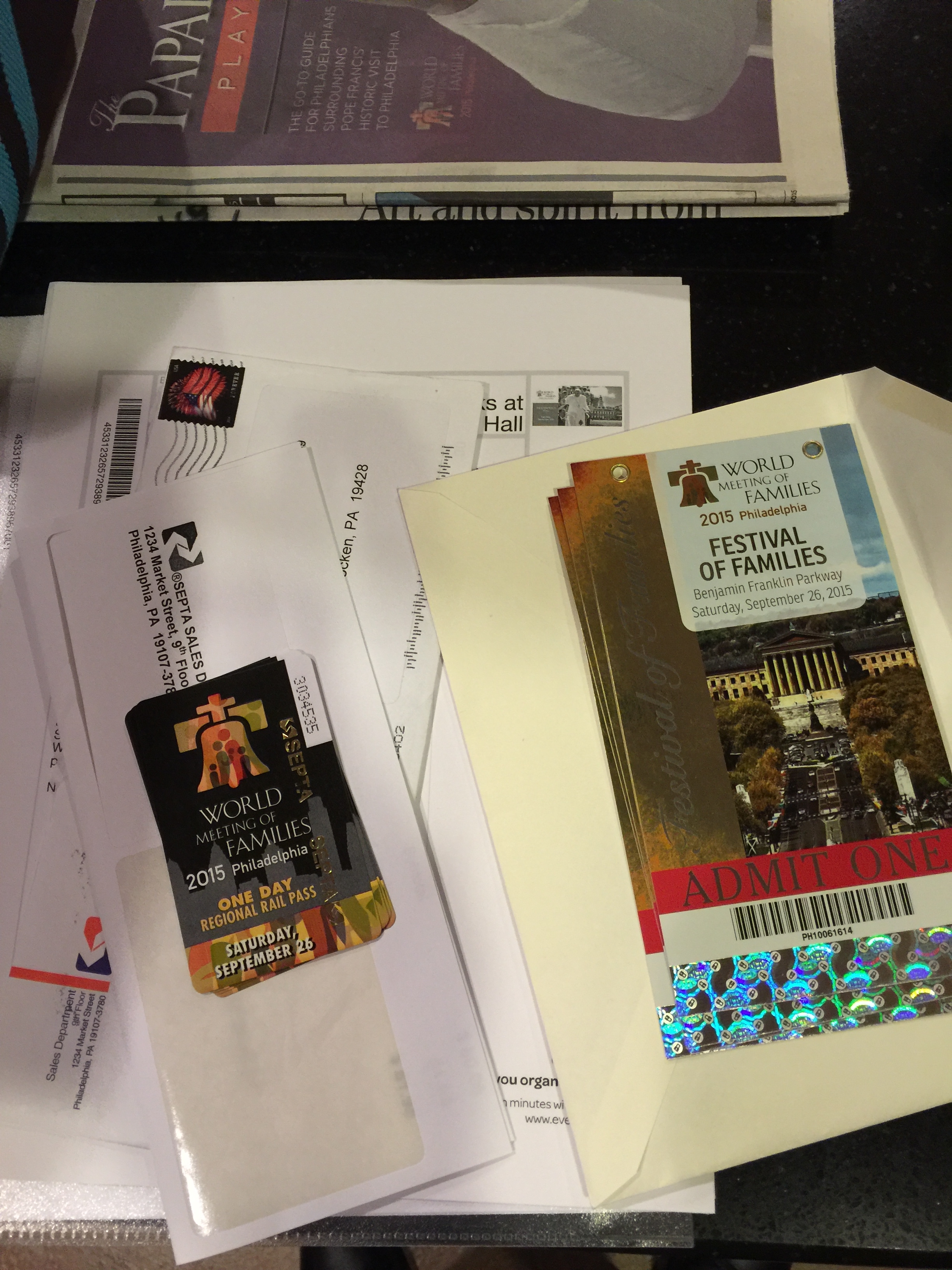 Once we arrived at 30th Street Station in Philadelphia, we had to walk to Independence Mall (about 3 miles).  There were no cars in the city, for security reasons. 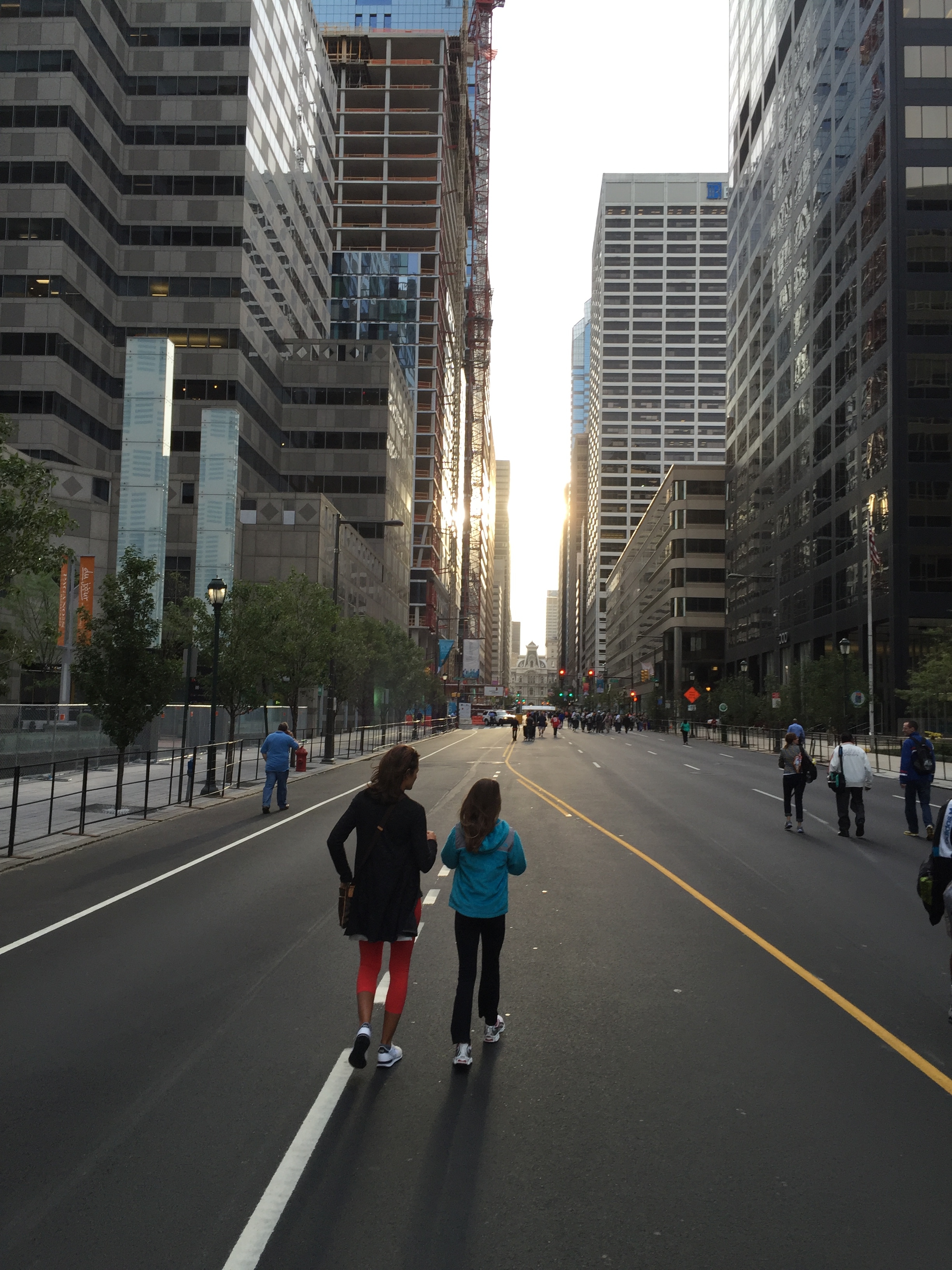 We learned how 1 million people were going to go the the bathroom this weekend in Philadelphia.  Take a good look at the bridge.  Do you see the line of blue dots?  That is a line of porta-potties. 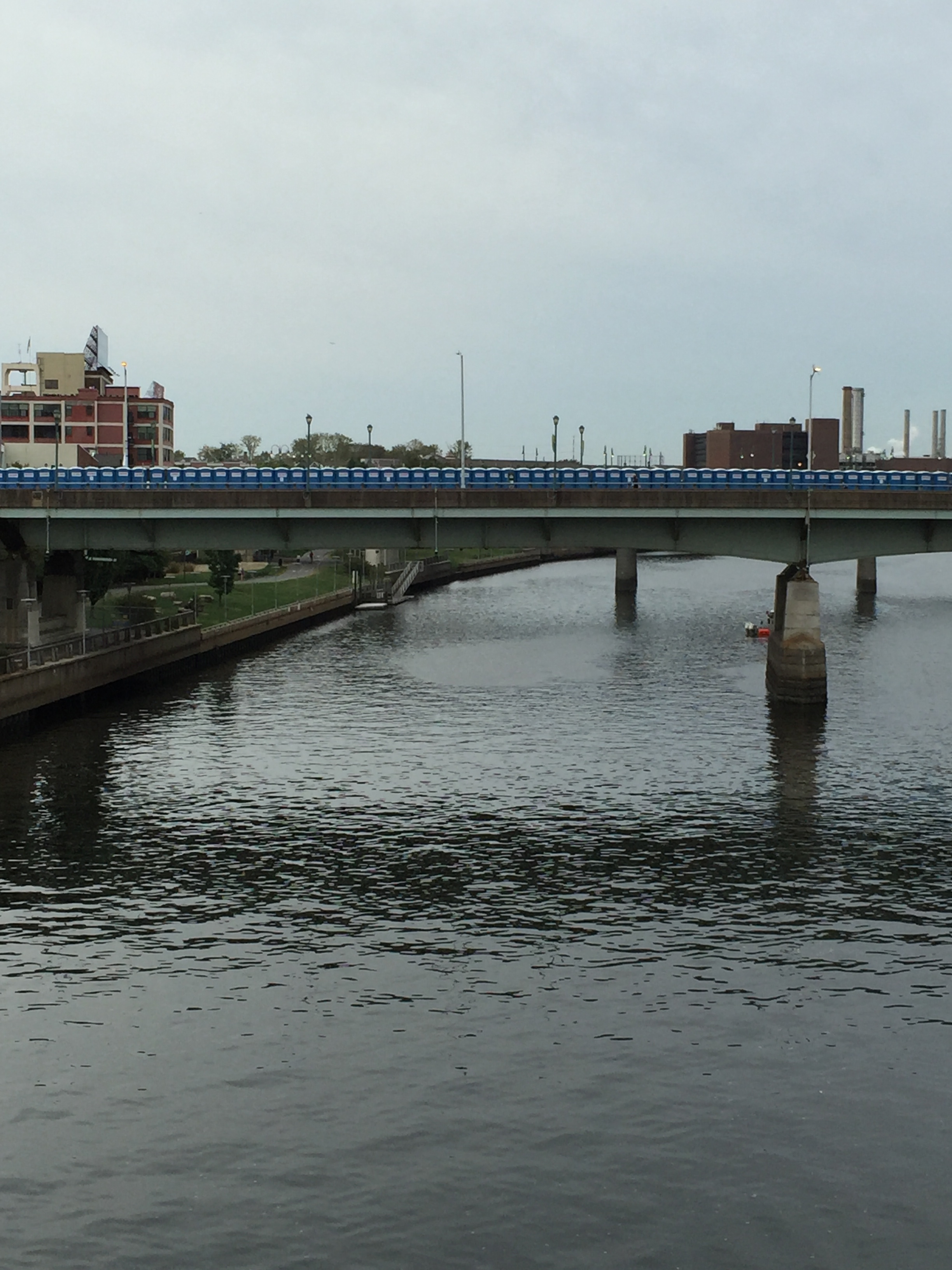 We walked through a city that was eerlily quiet on Saturday morning…..We had to clear a mammoth security checkpoint to enter Center City.

This was the scene at Independence Mall for the Papal speech: 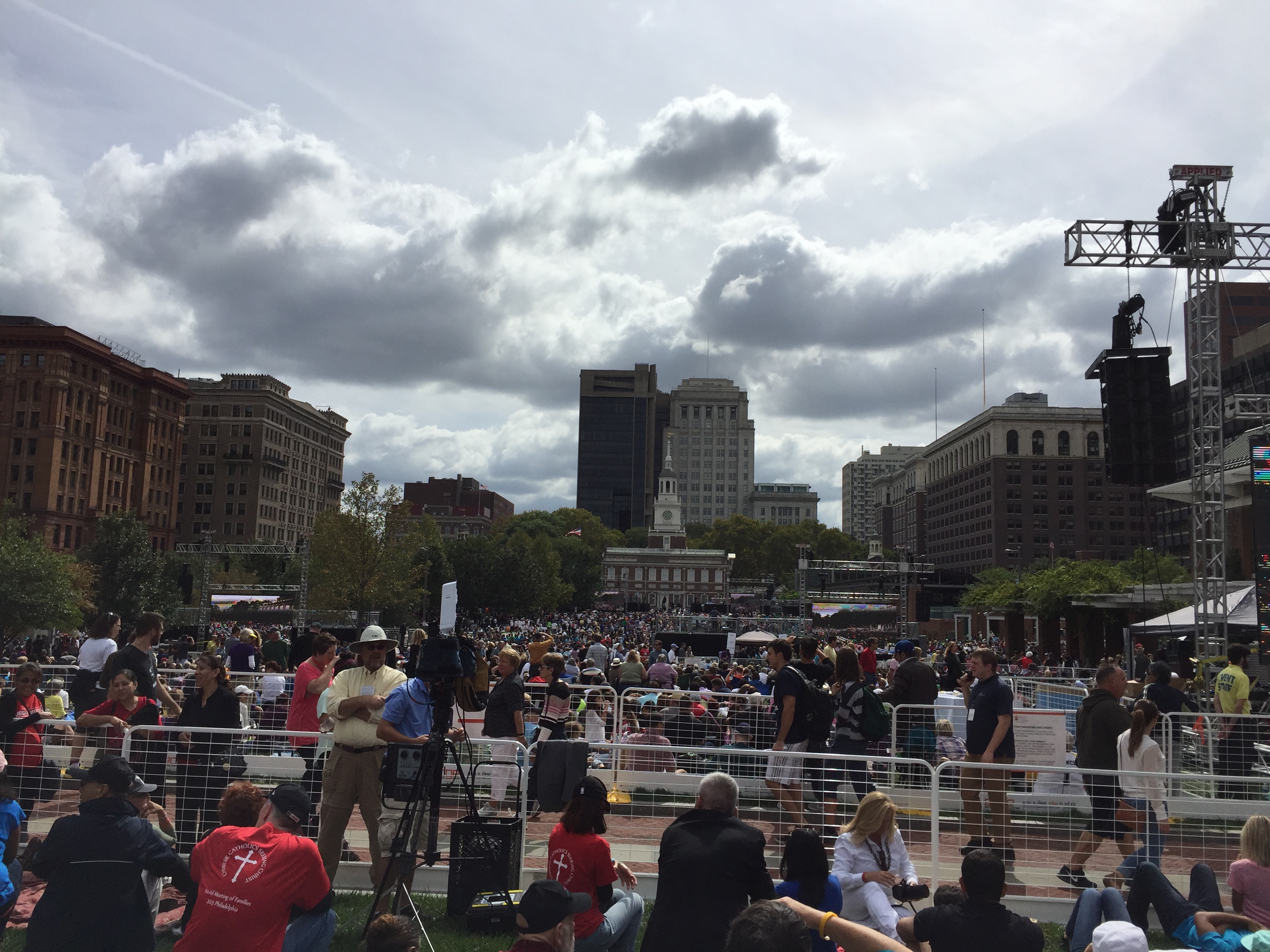 And this was part of our little family scene: 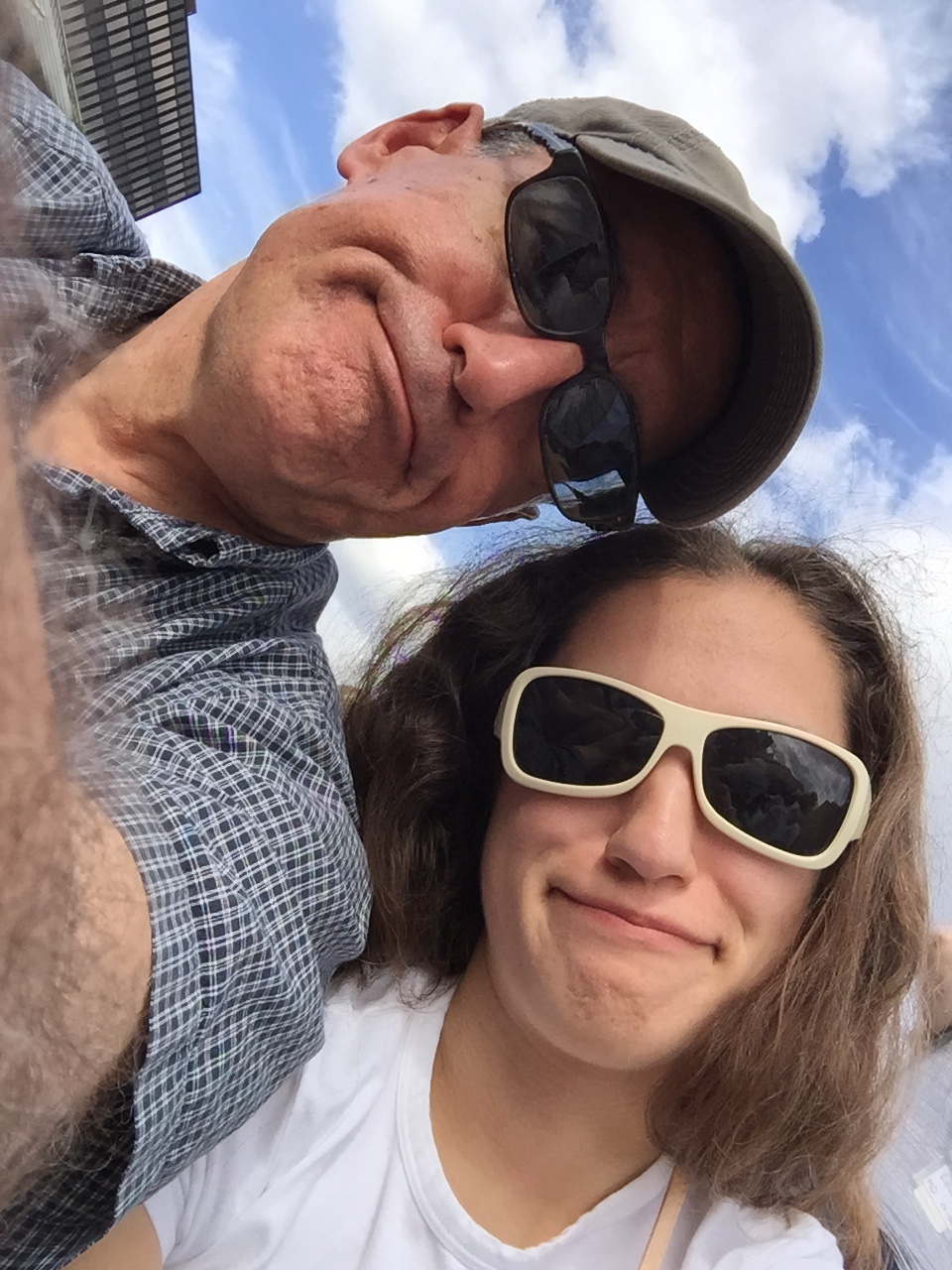 This was the scene at night on the Parkway, just before the Pope arrived for the Festival of Families. 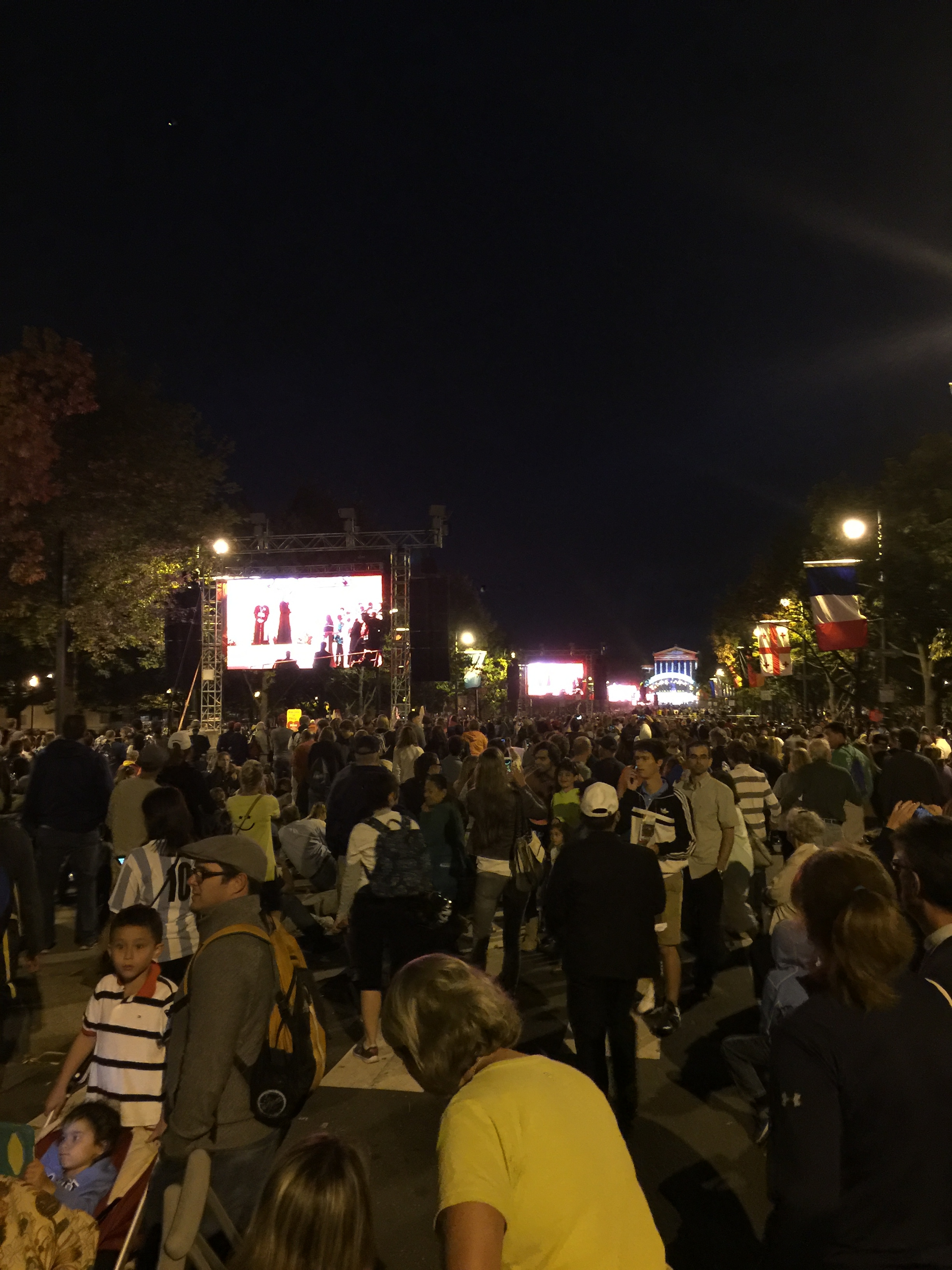 And after a quick walk back to 30th Street Station, after 12 hours in the city, this is what our train looked like on the ride home: 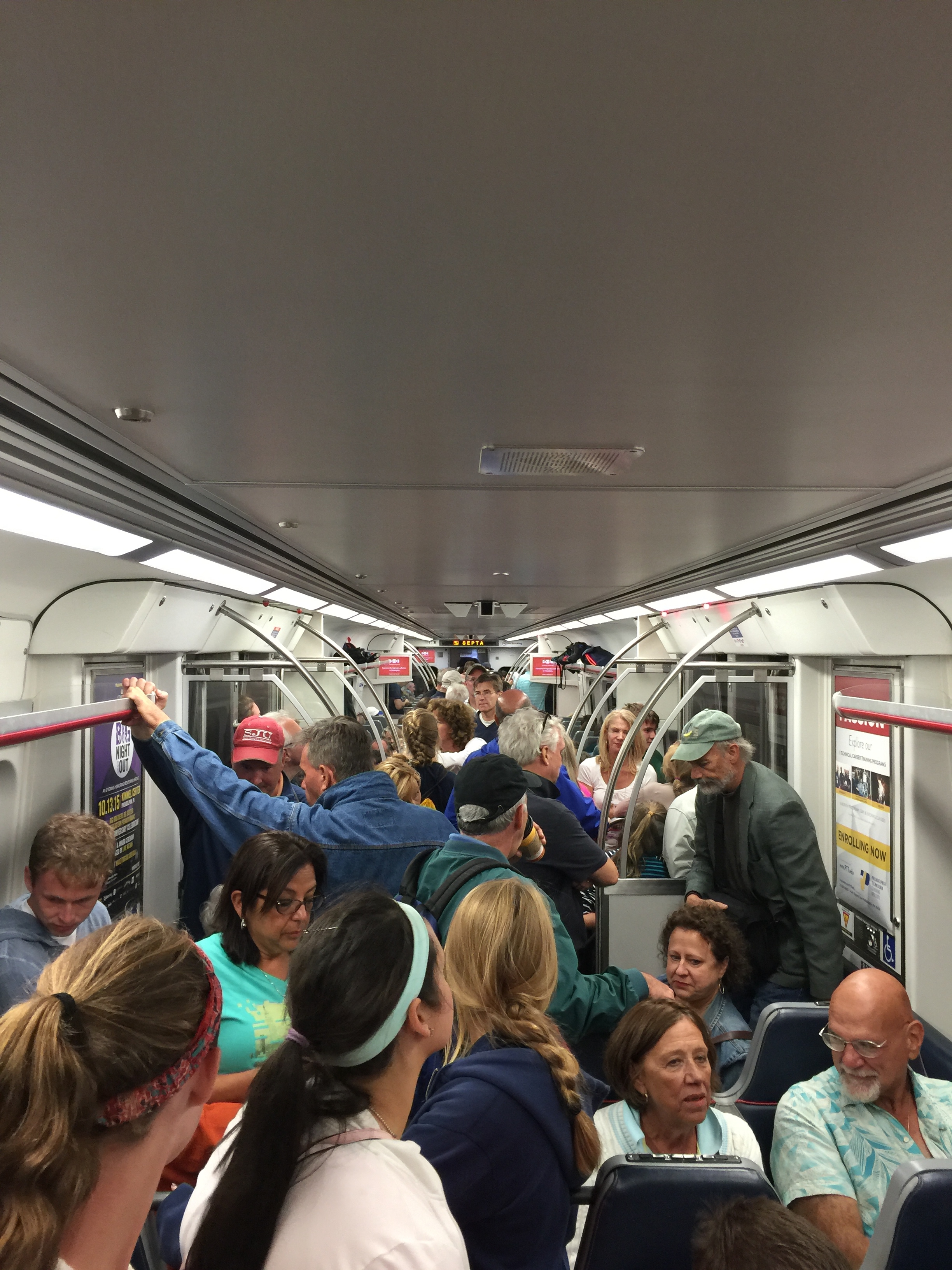 None of these photos captures the spirit of the day.

Maybe a couple of stories will.

After the Pope’s speech at Independence Hall, we began walking towards the Benjamin Franklin Parkway.  We were walking with several other people, including some Sisters from an order in Connecticut.  They didn’t know where they were going, so we suggested that they walk with us.

I forgot to tell them that my ancestors got lost in the desert for 40 years.  I probably should have told them that….. 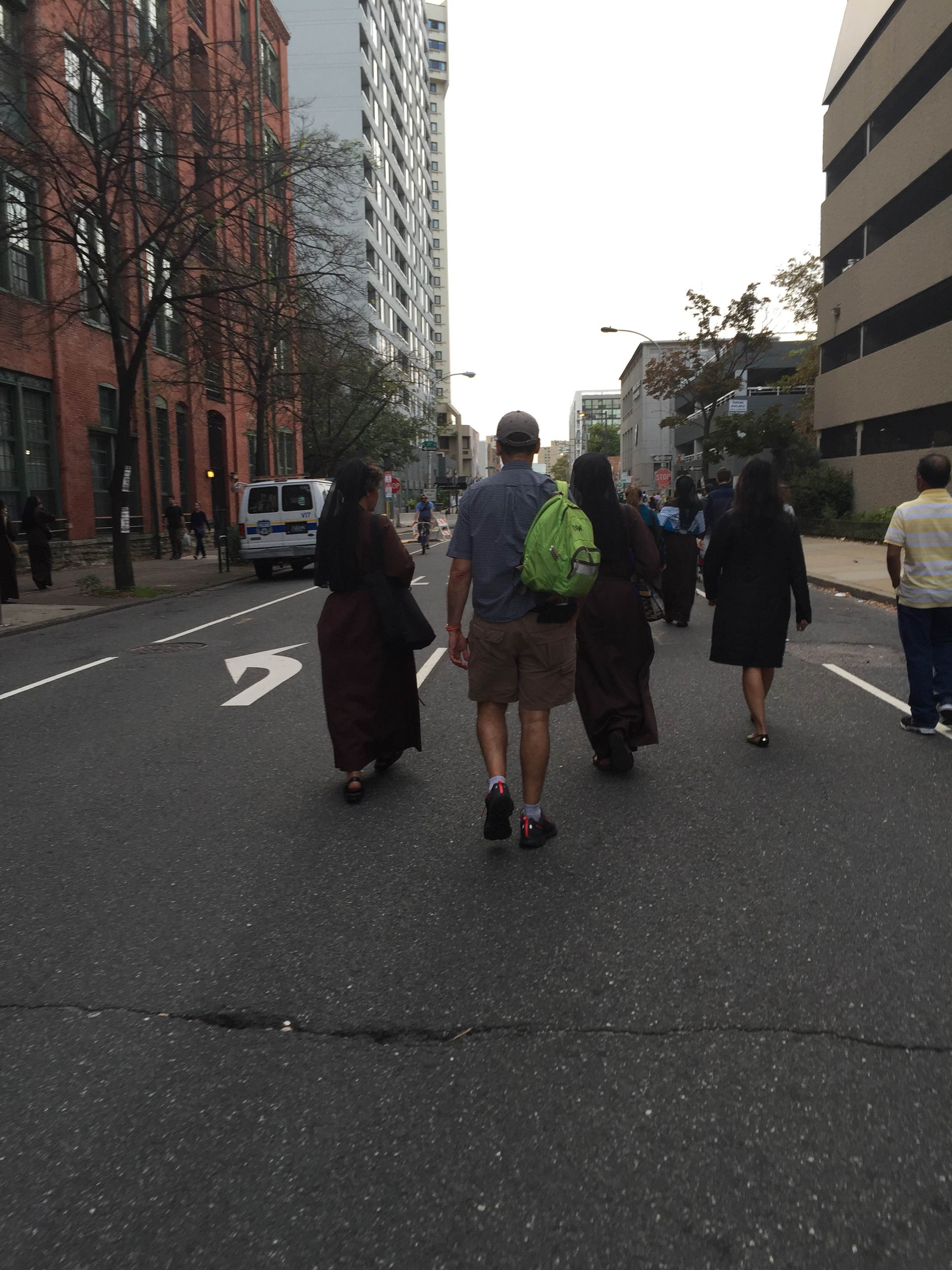 We spoke during our walk.  One of them told me that Philadelphia, and Philadelphians, had been so good to them during their visit, and that they could not wait to return sometime soon and enjoy Philadelphia again.

Later that evening, on the Parkway, my daughters were behind a wall of hundreds of people, craning their necks for a glimpse of the Pope as he drove up the Parkway.

A Philadelphia Police Officer allowed them to climb up onto a police vehicle, and stand next to him, as the Pope drove by.  On one condition.

That they agree to send him copies of the photos and videos that they were going to take of the Pope.

After the Pope drove by, I shook the Officer’s hand, and I said “God bless you, Officer”.  It looked like he was going to cry.

At the end of one of my favorite songs, there is a lyric “strangers stopping strangers, just to shake their hand….everyone is playing, in the Heart of Gold Band”.

I listened to, and watched, every one of Pope Francis’ speeches this past weekend.  He has a custom, at the end of each speech, of saying “Pray for me”.  Several times this weekend, he said “Pray for me”.

At the end of the Papal Mass on Sunday, he looked out at the crowd, and he said “Pray for me”.

Then he smiled, and he said “Don’t forget!”

This weekend, I saw priests and nuns, pilgrims and parents, and all kinds of visitors in the City of Philadelphia.  Everyone was well behaved.  Even the protestors (it isn’t a big event unless you have protestors) behaved themselves.  I saw no issues all day.

I heard someone refer to Philadelphia as “the City of Brotherly Love and Sisterly Affection”.

Everyone played in The Heart of Gold Band.

Is it ok if a Jewish kid from Northeast Philadelphia thanks a Jesuit Priest from Argentina for that?