In 2004, I was on a business trip in London. In the middle of my trip, I received a note: “CALL HOME-URGENT”.  I called Theresa, and she told me the bad news. My mother had had a stroke, and I needed to get onto the next plane home. The next plane home wasn’t until the following morning. I rushed from the plane to the hospital to see my mom.

Before they would let me see her, the neurologist spoke to me, in order to prepare me for what was ahead. He explained that she had had a devastating stroke, that she had lost 1/3 of her brain. She would never be the same again, and there was nothing that they could do about it.

I walked in the room to see her, and she was sitting up in bed talking to visitors. I was confused. There was a disconnect between what the neurologist prepared me for, and what I was seeing in front of me.  I eventually learned that the neurologist was right. She had had a devastating stroke, and she never was the same again. While she could sit up in bed and talk to people, she lost most of her short term memory.   She could remember little details from years ago, but could not remember the name of someone she was just introduced to. She could recognize my face, but she had no idea what my name was.

She lost the ability to walk. Her legs could move-but she could not (or would not) walk. It was as if she forgot how to. And she had almost no interest in re-learning.  Therapists worked intensively with her trying to help her to regain the ability, but she showed no interest. So she spent the rest of her days in a wheelchair or in bed.

She also lost her “filter”. It is hard to explain, but I guess we all have a capacity to think inappropriate things, but not say them. My mother lost that capacity. Anything that she thought, she said. Some of it was surprising, some of it was shocking, and some of it hurt.

My father tried to care for my mother at home for almost a year. He was saintly about it, but after a year, he and my aunts found a wonderful nursing home for her. I know that sounds strange, but it was a wonderful place. It was light, and warm, and clean, and it even smelled ok-something that doesn’t happen too often with nursing homes.

I visited her as much as I could, which was at least once a week. I would stop in, and we would have awkward conversations. I would feel bad before I went, and feel bad while I was there, and then feel bad on the way home. But I visited every week.

I started talking about this with some of my friends. One of them, a lady named Debbie, asked me about my mother every time she saw me. Debbie was a friend, she was our caterer, and she was a character. She had a 10,000 watt personality. She met my mother at a party that she catered for us. Debbie would come up to me every time that she saw me, squeeze my cheeks in her hands and say “Hey Dollface! How is your mother doing?”

In August 2008, I received a telephone call, and learned that Debbie had been murdered by an ex-boyfriend. I miss Debbie.  I never had the chance to tell her how much it meant to me that she asked me about my mother every time that she saw me.

Six weeks after Debbie was murdered, my mother had a heart attack, and died on October 2, 2008. I had the chance to say goodbye to her, and tell her that I loved her. I am grateful for that.

I like to think that when my mother died, Debbie was waiting in heaven to greet her with a big hug and say “welcome to heaven, Dollface!”

I stopped by the cemetery yesterday. I go there a few times a year.  My mother and my grandmothers are buried next to each other. I stop by to say hello to my mom, and my grandmothers Nettie, and Helen. I’m named after Helen, so I say hello to her on behalf of myself, and also on behalf of Howard, Heather and Henry. Lots of people were named after her. (For reasons I do not understand, my grandfathers are buried in other cemetaries. It’s complicated.) 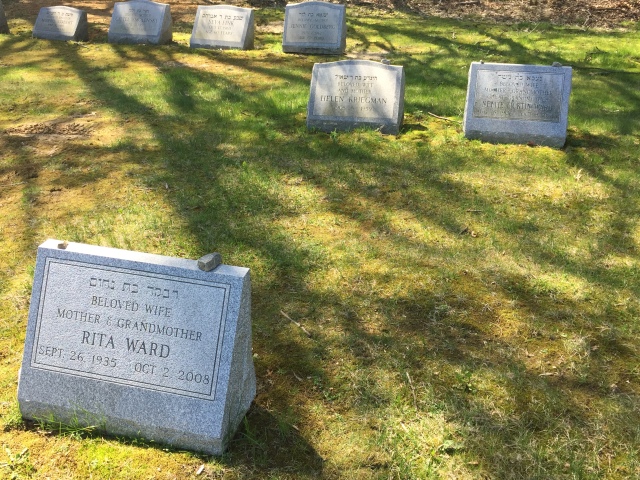 I stop by to pay my respects, and to tell them how we are all doing. I tell them about what my wife and my daughters are up to.   My mother and my grandmothers would be so proud of them.

Mothers Day is a painful holiday for me. I don’t have a mother any more. I just have memories.

I saw a photo of my mother recently, from a time before her stroke. I forgot what she looked like when she was standing up.   Almost all of my memories of her are from after her stroke.

Mothers Day is a Norman Rockwell type of a holiday for a lot of families. If you have read this far, you can tell that it isn’t that way for me. It is a sad day for me.  I try to do my best as a husband and a father to make Mothers Day happy for my wife and my mother-in-law. But the truth is that my heart isn’t into it sometimes. What I think about is…..even though the last several years of her life were tragic, even though I have a lot of painful memories……

I miss my mom.