I obtained my driving learners permit on December 29, 1977, my 16th birthday.  My father took me out driving right away. We spent a few minutes practicing in a parking lot, and then he took me out on some quiet side streets in Northeast Philadelphia.

We were driving on St. Vincent Street, a few blocks from our home, and the traffic started to pick up. There was some two-way traffic, and cars were parked on both sides of the street. I thought the road was narrow and the driving was getting difficult, so my father asked me to turn onto a side street so that I could stop driving.

As we approached the corner where I was going to turn, there was a traffic light with a Philadelphia Bulletin newspaper machine chained to it. (The Philadelphia Bulletin’s motto was “Nearly Everybody Reads The Bulletin”. I guess not, because they went out of business many years ago). I made my final approach for the right turn, and my father started yelling “too close- too close!”,  then I heard a crunch, and I saw the newspaper machine fly onto a neighborhood front lawn.

My father took over driving, and drove us home. I was crushed. I was now the Worst Driver Ever. We went home, and I sulked off to my room, certain to never drive again.

About 2 hours later, my father came to my room, and told me that he had our car repaired. He handed me the car keys, and said “lets go out driving again”. His idea was “if you fall off a horse, get right back on the horse”. Good move, Dad. I’ve driven for 40 years without hitting anything else.

May that newspaper machine rest in peace….. 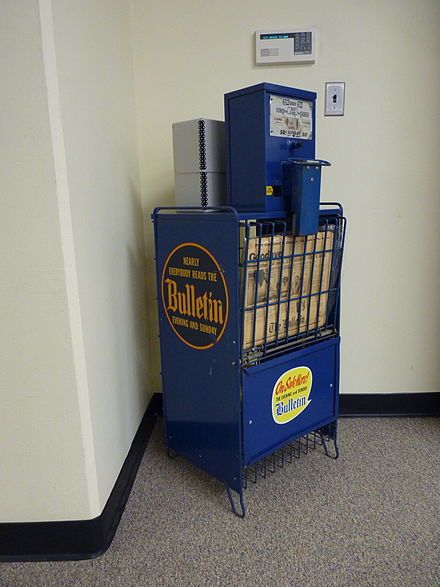