I’m a Philadelphia Eagles fan.  I’ve been a fan since about 1966 or so, when my father took me to Franklin Field to see my first Eagles game.  I was about 5 at the time.

I’m a lifelong Eagles fan.  That means that I have suffered through some really bad stretches of football.  The Eagles have had some awful coaches (Joe Kuharich, who went  28-41, and was so unpopular that a fan rented an airplane that flew above the stadium with a banner that read “Joe Must Go”).    I’ve suffered through the Ed Khayat era, and the Mike McCormack era.

I was a season ticket holder in the 700 level of Veterans Stadium.  I was at the Vet when Wilbert Montgomery ran downfield to clinch the NFC Championship against the Dallas Cowboys.

I went to the Super Bowl in 2005 (Super Bowl XXXIX).  The Eagles were tied with the Patriots after three quarters.  Then my quarterback threw up on the field (really-check the video on YouTube), and my coach forgot how to manage the clock.  So the Eagles lost, 24-21.

The Eagles have not won a championship in my lifetime.  They last won an NFL Championship (before there were Super Bowls) on December 26, 1960.  I was still a year and three days away from being born.

I want a Super Bowl Championship for the Philadelphia Eagles.  And I want one while my father is alive, so that we can celebrate that Super Bowl together. 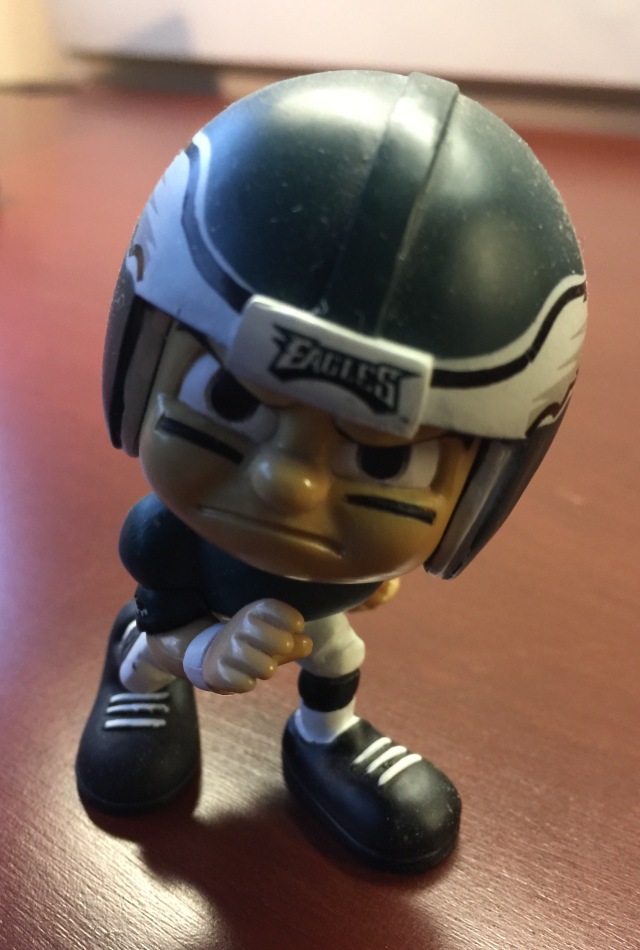 If you are not an Eagles fan, you may not understand the expression “long-suffering”.  I know a fellow named Nick.  Nick is a pharmacist.  A well-educated man.  A world traveller.  A smart guy.  He is also a lifelong Eagles fan.

Nick is taking a sabbatical from the Eagles this year.  He isn’t watching any games.  He isn’t listening to any games. He isn’t reading anything about the team.  He can’t take any more Eagles suffering.

The Philadelphia Eagles traded up in the draft this year, and selected a quarterback named Carson Wentz.  They also signed two other quarterbacks (Sam Bradford and Chase Daniels) to expensive longterm contracts.  So I thought that Carson Wentz would have a year or two to watch games from the sidelines, and develop slowly in the NFL.

Then a quarterback named Teddy Bridgewater, who plays for the Minnesota Vikings, tore his ACL 8 days before the start of this NFL season.

Then the Eagles traded Sam Bradford, their starting quarterback, to the Vikings.

Then the Eagles named Carson Wentz as their starting quarterback.

Then things started getting interesting.

Carson Wentz has had a start to his rookie season unlike any other rookie quarterback.  He has led the Eagles to a 3-0 start.  For a little bit of perspective, no rookie quarterback in the history of the NFL has started 3-0, and done so without a turnover.

I know that it is only three games into the season.  I know that the first two games were against crappy teams (the Cleveland Browns and the Chicago Bears).  But then the Pittsburgh Steelers came to town, and they were heavily favored.

The Eagles destroyed the Steelers.  My next door neighbor is a native of Pittsburgh.  He flies a Pittsburgh Steelers flag in front of his house on game days.

He is avoiding me this week.

People in this region are starting to get excited.  I don’t blame them  It’s been a while since we’ve experienced disciplined football.  “Disciplined football” means controlling the time of possession, avoiding turnovers, avoiding penalties, and using timeouts wisely.  These are things that Andy Reid and Chip Kelly could not figure out how to do.  (Remember all of the “Chip Kelly is a genius” quotes?  Where is Chip Kelly now?  He is on his next and final NFL job).

Doug Pederson is coaching really well right now.  His team is playing disciplined football.  They did not allow a sack the last game.  They haven’t had a single turnover through three games.  They have controlled the ball at least 35 minutes each of the first three games.  And the opponent has had more penalties than the Eagles all three games.

But Super Bowl tickets are going for $3200 on Stubhub, and I do have the weekend of February 5th blocked, just in case.