I invest in something called the Standard & Poors 500 Index, also known as “the S&P 500”. It is a “shopping basket” of the 500 largest publicly traded companies in the world. 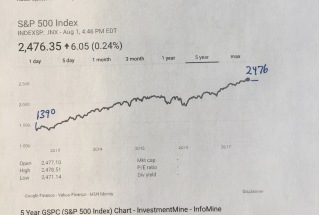 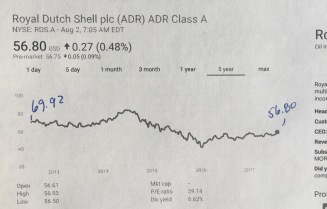 That means that in the same timeframe when the average large company grew by 78% in value, two of the largest oil companies lost value. If you had invested in either company in the last five years, you also lost money.  Do you think that the shareholders of oil companies are happy with their investment? 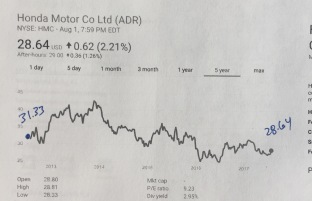 Do you think the shareholders of car companies are happy with their investment?

—–
Let me connect some dots for you.

On July 5, 2017, Volvo announced that it would stop selling cars that use internal combustion engines by 2020. As of 2020, they will sell cars that use only hybrid or electric engines.

Four European countries recently passed laws that prohibit the use of gasoline in automobile engines by 2040. If you can’t use gas, you can’t use a gas-powered engine.

Will Volvo and those European countries meet those deadlines? Probably not. But they have made promises to their stockholders and constituents, and they either have to meet those goals, or explain why they didn’t meet them.

Tesla just released an electric car model with a 300 mile range on one charge, and they are sold out through the end of 2018.  Demand is so high that if I send them a $1000 deposit to get in line, I won’t get mine until early 2019.
—–
The internal combustion engine is going to start declining in use. That means that car companies and oil companies that depend on internal combustion engines are in trouble. Don’t believe me-go check their stock price. Or go ask their CEOs (Ford just replaced theirs).

The internal combustion engine, and everything associated with it, is a really bad investment.