About 15 years ago,  I had a physician’s appointment.  My physician was looking at my back, and she said “I don’t like the looks of this”.  I asked her what she meant, and she told me that she saw a spot on my skin that looked abnormal.  She referred me to a dermatologist.

I went to the dermatology appointment, and he looked at the spot, and he agreed that he didn’t like the look of it.  He did a “whole body” check, and he found 9 more spots that he also didn’t like.  He removed all of them, biopsied them, and they all came back as non-cancerous.

He suggested that I should be examined every six months, because of the number of moles and pigmented spots that I have on my body.  I do see him every six months for routine checks.  Twice he has biopsied something, and discovered that it was pre-cancerous.  So twice I have had to go back to his office, and have “wide margins” removed.  That means that he had to cut wide and deep around the area, to make sure that the entire thing was removed.  I’ve had one lesion removed on my shoulder, and another removed on my foot.

I had a dermatologist appointment yesterday.  I had two irregular looking moles removed.  I have bandages, and I have to do a little bit of wound care.  It’s not a big deal.  This is part of preventive health care. 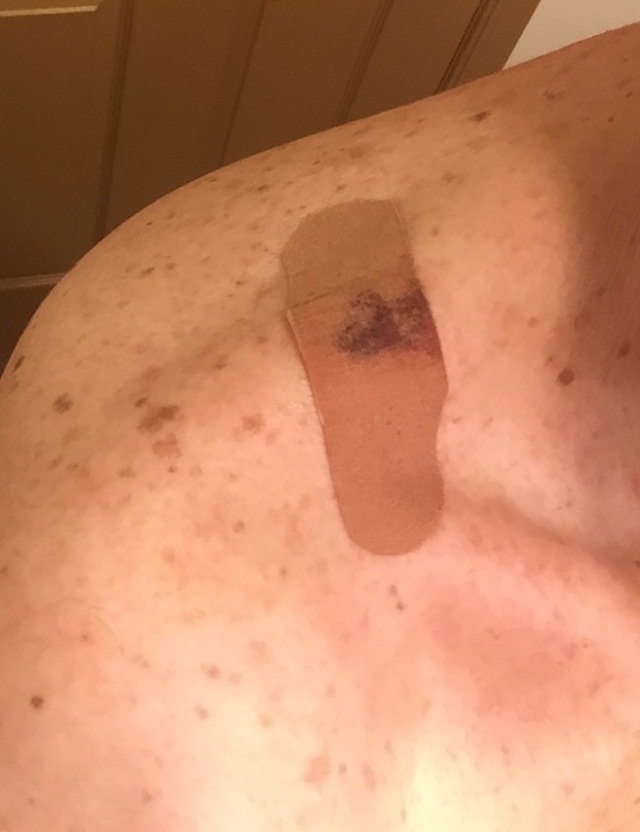 Skin is a funny thing.  I have it, I’m in it.  It is sort of like a container for me, or of me.  I wash it, I shampoo some of it, I shave some of it.  I cover parts of it, especially when it’s cold.  I put sunscreen on some of it when it’s hot and sunny outside.  But I don’t think about my skin much, except when I have a dermatologist appointment.

We have a lot of expressions about skin in our language.  “Thin skinned” means someone who is sensitive, and “thick skinned” meaning someone who is not so sensitive.  One expression that I use a lot is “comfortable in my own skin”.  I was trying to explain what this expression means to a friend from another country, and the best explanation I could think of is “at peace with myself”.

My skin has a lot of moles and spots.  It also has about 100 places that used to have moles, but the dermatologist took those away for safe keeping.  My skin also has me inside of it.  I’m learning to be at peace inside this container, for however long I get to keep the container.